Information about the Uyghurs is found in Chinese annuals and Göktürk and Uyghur inscriptions. Although the word Uighur has various meanings, the most accepted one is; kin means ally. The Uyghurs are shown as descendants of the Huns in Chinese sources. It appears as a tribe of the Toles, which spread over a large part of Central Asia in the 5th century. The Uighurs were known as Kao-chi (high-wheeled carriages) in this period. In Orkhon Inscriptions, they were referred to as Dokuz Oghuz. The Uyghurs were the indigenous tribes of the Orhun and Selenga valleys. When the Gokturk state was established, they recognized their dominance. When the Gokturk state was destroyed by the Chinese in 630, they were freed and formed a political union. China, on the other hand, supported this Uyghur union against the Gokturks. In this age, there was a person named Pusa, who was named Alp İlteber. After 681, the Uyghurs had to join the Göktürks with the emergence of İl Teriş Kağan. The Uighurs, who had gathered themselves during this time, found another opportunity with the weakening of the Gokturk Empire. Uyghurs, united with Turkish communities such as Basmil and Karluk, which were under the rule of the Göktürks, defeated and killed Göktürk Kagan Ozamış in 742-43.

Establishment of the Uyghur State

When the Gokturk Empire disappeared, a new state was established in 743 under the rule of Basmiller. The Uyghurs were the Left Yabgu of this Basmil Khaganate, that is, the eastern Yabgu; The Karluks, on the other hand, became the Right Yabgu, that is, the western Yabgu. This new state was in the form of a full federal state. In 744, the Uyghur Yabgus defeated Basmil Khan and declared himself khan. He received the title of Kutluk Bilge Kül Kagan as the title of Khaganate. Thus, the Uyghur Khaganate was established. As it can be understood from the title of this khanate, the traditions and customs of the Gokturk state continued in the new Uyghur Khanate. However, as foreign beliefs such as the religion of Buda and Mani spread among the Uighurs, some changes will begin to occur in the titles of Kagan. Since the founders of the Uyghur state settled in the Orhun region, they are called Orhun Uyghurs.

When Kutluk Bilge Kül Kağan died, his son Bayan Çur became the khan. The eldest khan of the Uyghurs, Bayan Chur Kagan, took the title "Bilge Kagan, who was rich in Tengri and made a city". The meaning of this title was the Wise Kagan, who was born in the sky and ruled the state. The period of Bayan Chur Kagan (747-759) is a period in which the Uyghurs expanded in four directions. Kara Türgeş state in the west had to recognize the Uighur domination. The state authority was strengthened by subordinating Turkish tribes such as Kirghiz, Chik, Eight Oghuz and Dokuz Tatars. On the other hand, during this period, rich agricultural and commercial cities such as Beş-Balıg, Kuça and Karaşar in the south were also under the influence of the Uighurs. The relations between the Turfan region and the Uyghurs had also started from this period. One of the important works of Ms. Çur Kağan is the initiation of urbanization trends among the Uyghurs during her time. He founded a city with capitals called Ordu Balık (757).

On the other hand, the same khan, sensing the growing danger of Tibet, turned against them. At the request of the emperor, he helped suppress the rebellion of a Turkish-origin general named An-lushan, which created a great danger in China. With the agreement made at the end of this aid, the Chinese gates were opened to Uyghur traders. Miss Çur Kağan has an inscription in Turkish, written in Göktürk script, found near Şine-usu lake. In this inscription, his work as a khan is described. After the death of Bayan Chur Kagan, her son Bögü Kagan succeeded him (759). Bögü Kağan's activities were in two main areas, political and spiritual. His political activities were mostly on China. Due to the suppression of the rebellions that broke out in China, they frequently entered China. However, looting raids were also carried out in various parts of China when the Uyghurs entered China. The most important of the rebellions in China was the rebellion that emerged as a result of the foreign tribes uniting around the Tibetans. This Tibetan revolt could only be prevented with the help of the Uyghurs.

Bögü Kağan's greatest activity in the spiritual field was his acceptance of the religion of Manichaeism. Bögü Kağan was also the pioneer of this religion. Adoption of Mani, a merchant and urban religion, not only loosened the warrior spirit of the Uighurs, but also contributed to their advancement in science, art and literature. For a long time, there was a widespread belief among the Central Asian Turkish tribes that China, which has a very large and deep-rooted culture, cannot be conquered, and even if this is possible, it cannot be held for a long time. Bögü Kağan wanted to seize China in a weak moment of China. However, his vizier Baga Tarkan opposed this attempt of the Kagan because of the aforementioned belief. However, when he could not be heard, he killed Bögü Kağan and took the throne as Alp Kutluk Bilge Kagan (779). The next khans were his descendants. After this date, unrest started among the tribes that formed the Uyghur state.

The warrior side of the Uyghurs, who developed in terms of culture and trade, was weakened. In 840, the Kyrgyz living in the northwestern parts of the Uyghurs, with their horse force of 100,000, raided the Uyghur capital, killed their khan and put the people to the sword. In this way, Bayan Chur and Kutlug avenged terribly for the attacks they suffered during the time of Bilge Khagan. The Uighurs who survived this raid had to disperse in various directions to save their lives.

A significant part of the Uyghur tribes fleeing the Kyrgyz raid migrated to East Turkestan. The Uyghurs, who settled here around the cities of Turfan and Karaşar, are of great value in terms of Turkish civilization history. Even at the time of the Orkhon Uyghurs, these big cities of Turkestan, which were the centers of agriculture and trade, came under the influence of the Uyghurs. For this reason, after the collapse of the Uyghur state, this region became a safe place for the Uyghurs who fled to Turfan. After 848, the Uyghurs, who gathered themselves and made their neighbors accept their existence, declared their khanate in 856. During this period, Mengli Kagan was at their head. Mengli Kağan, Uluğ Tengride Blessed Alp Külük Bilge Kağan (in today's Turkish; Great God found strength and happiness, hero, hardworking Bilge Kagan) had the title.

They were called Turfan Uyghurs because they chose the city of Turfan as the center of the khanate. Also, because they used the city of Beş-Balıg as their summer capital, the name Beş Balık Uyghurs was also used in the sources. The Chinese administration supported this Uyghur state against the Tibetan threat. The Uyghurs also expelled the Tibetans, who had increased their activities in East Turkestan, from this region. Thus, they extended their borders in the west to the city of Urumqi. Turfan Uighurs believed in the Mani religion. Uyghurs, who also used this religion for their political purposes, put pressure on China under the pretext of protecting their religion.

Uyghurs, who will show great developments in terms of culture and civilization, will keep their state alive until 1335. The leadership, knowledge and experience of these Uyghurs had a great share in both the establishment of the Hitay state in the north of China in the 10th century and the development of the Genghis Khan state. The Mongols, who gave very important duties to the Uyghurs in the state organization, used the Uyghur script as their writing. Mongols XVI. By the 19th century, the Uyghurs played an important role in the Turkification of a large extent.

After the Kyrgyz raid in 840, some of the Uyghurs, who were dispersed in all directions, landed in the southern parts, namely the Kansu region between China and East Turkestan. This region, which was an important trade center, was on the famous Silk Road. The Uyghurs who settled in this region established a new state in the big city of Kan-Cov. These Uyghurs, who would later be called the Yellow Uyghurs, remained unmixed with the local people of this region. It is possible to come across the descendants of these Uyghur Turks, who have kept the Turkish language and culture alive for many years, even today.

The Yellow Uyghurs, who accepted Buddhism as a religion, are very advanced in terms of trade and civilization. The Thousand Buddha Caves, where the most precious works of Buddhists are found, were in the region where the Yellow Uyghurs lived. Uyghur Turks, who converted to Islam in the following years and made significant contributions to the Turkish-Islamic civilization in the Karakhanid Era, continue their existence today under the same name.

Rulers of the Uyghur State

Note: This text has been translated by Google from http://www.turkosfer.com/uygur-devleti/ 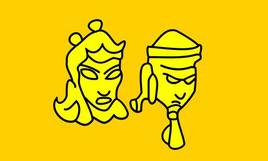